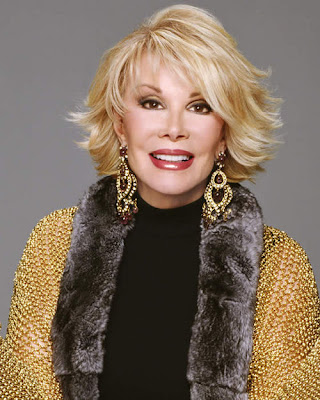 If you want to know something truly personal and revealing about the Joan Rivers nobody knows, go see the gripping film I saw last night at the Tribeca Film Festival titled Joan Rivers: A Piece of Work.

You can read into that title many things, as Joan--a longtime friend, interview subject (and fellow dog lover)--is wildly irreverent, controversial, hilarious, even offensive to the delicate sensibilities of some--but at the very least, she's the hardest-working woman in show business. Her work ethic is without peer.

The back-breaking schedule detailed in this year-at-a-glance documentary would exhaust anyone half her age, so she's fortunate to have such an astute and warm-hearted support team--including her longtime assistants Graham and Jocelyn, her housekeepers, fantastic agent, Larry Thompson, and a circle of close friends. 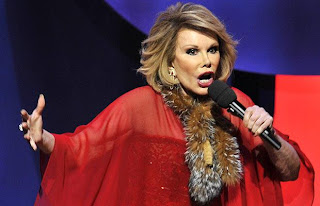 Still, wouldn't she like to just relax by the pool? You must be kidding. At almost age 76, she jets across the country, jamming in nightclub appearances, TV shows, book signings, QVC jewelry spots, all of it non-stop though she could afford to retire and "live carefully," she says in the film. Retreating from the stage of life, though, is anathama to her and she wants to beat the record set by George Burns, who was still entertaining crowds well into his 90's.

Compared to that, who wants to golf or play bridge? Joan wants to travel the world, entertaining people, her mission and life purpose being that of an actress "playing a comedienne," for Joan's abilities as an actress, though underestimated by some, are formidable. When she takes the stage, nobody commands it better. And off-stage, chic in her signature jewelry and glittery costumes, she's a youthful wonder--the real secret of it not being plastic surgery, but rather the compulsive energy that feeds her ambition to stay current and active. 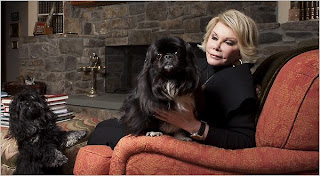 In fact, in the film, she admits that her greatest fear is having an empty calendar, joking that when she looks at a blank page of it, she has to wear sunglasses to shield herself from the painful glare.

How ironic that, even with her formidable accomplishments, she's still proving herself, still vulnerable to rejection.

At times, it's painful, in this film, to watch the triumphant winner of CELEBRITY APPRENTICE struggling to pin down nightclub dates, public appearances, and product endorsements, while trying out an autobiographical play that she ultimately did not bring to the Broadway stage.

During tryouts in London, the lackluster reviews were painful to her. But criticism is nothing new to Joan. She's faced rejection at key points in life, most notably in the l980's when she left Johnny Carson to host her own late-night talk show on Fox, a move that resulted in Carson blacklisting her from late-night NBC talk shows. It's their loss.

The movie also captures hilarious vignettes of Joan in live performance--but most of the film is rather serious and emotional, capturing Joan in private moments. On a poignant note, there's one very personal off-stage scene that tells you everything you need to know about the real Joan Rivers. There she is, sitting in the back seat of her limousine with her adorable grandson, Cooper, both on their way to deliver food on Thanksgiving, part of Rivers' work for 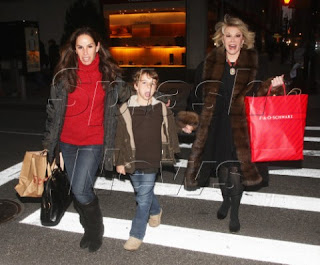 God's Love We Deliver, a cause she's championed for years.
In the car, Joan gently takes Cooper's left hand in hers and tells him affectionately: "I love your hands," turning them over in hers. And then the boy rests his head on his grandmother's shoulder as they snuggle, a tender part of Joan I'll never forget.

Her love for that boy, and for her daughter, Melissa, reminds you that beyond showbusiness, here's a woman with a vibrant heart and caring spirit. 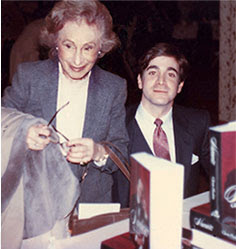 Unexpectedly, this small moment in the film brought me to tears. Maybe it was because I was remembering the close bond I felt with my own grandmother, Essie, who like Joan, was unusually modern, a remarkably strong woman who even had her own line of cookies at Bloomingdales! There she is with me in the picture to the right, at one of my book autograph sessions.

Anyway, Cooper is a very lucky boy to have a grandmother like Joan.
Posted by Glenn Plaskin's Reflections at 11:30 AM