An Unbeatable Technique For Losing Weight: Get A Puppy! 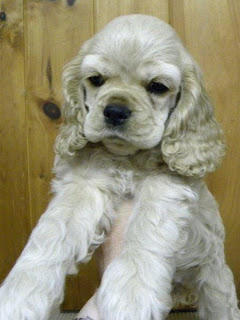 Although the adventure with my new puppy started ten days ago, today is the first time I've written about Lucy, named after one of my all-time favorites, Lucille Ball.

Why has it taken me so long? Because I was so overwhelmed, and at times panicked, by Lucy's homecoming and the challenges of taking care of a 10-week-old cocker spaniel puppy--that I admit to seriously contemplating returning her! (Whew, but I didn't.)

For me, the transition really shook up my world. I guess it's because I haven't had a dog for eight years, not since Katie--the star of my upcoming book, KATIE UP AND DOWN THE HALL. So I was out of shape, but no longer. The dining room has been completely given over to her large play pen and kennel and the house is littered with every kind of chewy and plush toy you can imagine.

After just a few days, Lucy's puppiness--her contagious energy, those big brown eyes, her astute intelligence, and that puppy smell--completely won me over. She is the most outgoing, confident dog I've known, completely comfortable with anyone. You can hang her upside down and she's happy, extroverted and ready to play with adults, kids, and most importantly, other dogs. 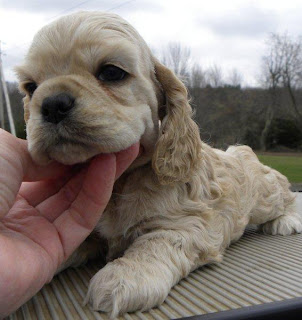 The other night there she was, weighing in at six pounds, wrestling assertively with a 92-pound bushy-haired giant (I don't even know the breed) who loves puppies. Eating them? I wasn't sure. But Lucy didn't have a care in the world. She grabbed onto his bushy tail and went for a ride--never letting go until she was left with a mouthful of fur. Then she put her entire head into his mouth before biting his ear and chasing him around the lobby of our apartment building.

She also has a Wheaten terrier friend named Norma and a Dachshund named Stanley, both regular play dates.

She also loves kids, and over the weekend, she met a little boy in Greenwich Village, pictured below, his smile telling you the entire story about the joy that a puppy can give, to anybody, anywhere, at anytime. 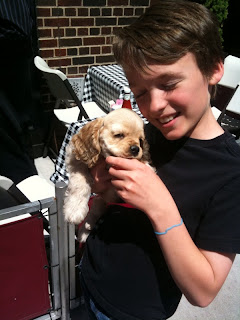 Lucy is making her debut on May 26th at Book Expo America, where I'll be signing autographs for KATIE UP AND DOWN THE HALL.

I hope you'll drop by at 1 pm to say hello. You can ignore me--but you'll never get away from the Hachette Book Group USA'S booth without getting a lick from Lucy.

And for the first 100 people who come by, there will be special dark chocolate treats shaped into dog bones--bad for dogs, good for people. See you there!


Posted by Glenn Plaskin's Reflections at 10:55 AM