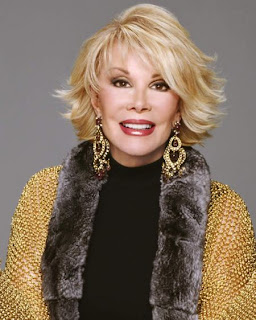 Last night was the funniest, most enjoyable evening I've had in months thanks to the inimitable JOAN RIVERS, who performs periodically at Manhattan's West Bank Cafe, trying out new material while also raising money for her two favorite charities--Guide Dogs For The Blind and God's Love We Deliver.

You must not miss her at West Bank. My dog-loving book guru, HARRY HELM, brilliant editorial director at Hachette Book Group, and his trusty assistant, Adlai Yeomans, were at my table, along with Broadway actor Brandon Williams and his wife, Sheila, a portrait photographer, the fantastic life coach Peg Wallis, the adorably congenial real estate rep Taylor Yunis, accessory designer David Cohen, and my "youngest"friend, octogenarian Bud Klauber, energetic and stunningly dressed as always.

But nobody can glitter or glam it up better than Joan Rivers--sleek as a runway model and stunningly dressed in red-sequined Donna Karen, Chanel shoes, and glittery black jewels. I can tell you that while her contemporaries are sitting on the golf course or planning a cruise, the winner of last year's CELEBRITY APPRENTICE never stops, delivering her act with the energy of a teenager, her bawdy irreverence doubling me over.

One of my favorite moments was her take on airport bathrooms, as she loves to snare one of the handicapped ones (me too!) which are just about as big as studio apartments in New York City. "I hold that bar in the stall and do Pilates!" she joked, pantomiming it all as she lifted her legs, blithely ignoring knocks on the stall door as others attempt to get in. Fantastic. There were also hilarious hits on Angelina Jolie, Cher's sex-changing daughter, Chaz, Ann Frank, Tiger Woods, and Helen Keller. You have to hear it all to believe it. All new and fresh.

Led backstage afterward by her congenial assistant, Graham, I found Joan quietly warm and funny as we exchanged a hug. She was one of the first celebrities I ever interviewed, back in the 80's, and in the 90's, she was was one of my subjects in the TURNING POINT book, where she spoke so poignantly about the death of her husband, Edgar. Ever since she's been a model of independence, demonstrating the kind of resilience and adaption to change that inspires. And let's not forget her devotion to DOGS--she loves them and works tirelessly to support Guide Dogs For The Blind.

Later on, I'll tell you more about a special book launch for KATIE: UP AND DOWN THE HALL, a benefit for Guide Dogs For The Blind. You might even see Joan there, together with the famed interior designer Mario Buatta, known as the Prince of Chintz. Both Joan and Mario are featured in the book, Joan in a hilarious vignette about Joan Collins, and Mario in a chapter of the book titled: Prancing With The Stars. Nobody can prance or deliver a punch line better than Joan Rivers. 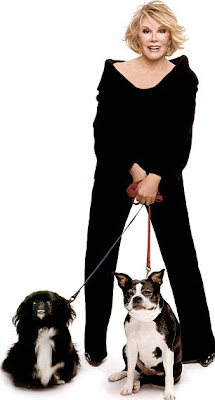 An incredible night--Thanks to Joan!
Posted by Glenn Plaskin's Reflections at 7:29 AM