The Jolt Of That First Book Review 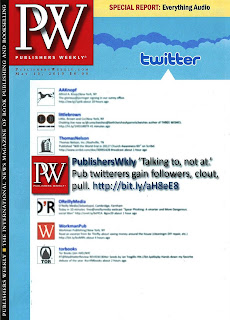 After an author finishes a manuscript, there's always an interminable lag time between the last edit, creating an advertising, marketing, and publicity campaign, and, at long last, seeing the book actually hit the stores and on-line sites. It's a drawn out process not much different than shooting a movie, then waiting for it to hit the theaters.

In advance of my upcoming book, KATIE UP AND DOWN THE HALL being published September 14th, one of the most important elements to it being noticed by booksellers is the advance review seen in PUBLISHERS WEEKLY, an American weekly trade news magazine targeted at publishers, librarians, booksellers and literary agents.

Published continuously for the past 138 years, the main emphasis here is on book reviews. And yesterday, out of the blue, unexpectedly, I received from the publisher this all-important review--placed as the lead non-fiction item in the current issue of the magazine.

You can imagine how an author feels opening to a review, wondering what the reception will be from an impartial observer. You never really know. Did I strike the right tone? Was the story compelling to anyone--but my Mom?!

Well, here's what I read, I'm grateful for it, and wanted to share it with you.

Katie Up and Down the Hall: The True Story of How One Dog Turned Five Neighbors into a Family
Glenn Plaskin, Hachette/Center Street, $19.99 (272p) ISBN 978-1-599-95254-3
Plaskin (Horowitz), journalist and lower Manhattan resident, shares the delightful story of how his precocious cocker spaniel, Katie, brought him closer to his neighbors and turned an apartment building of strangers into an urban family. Katie charms everyone she comes in contact with: elderly Pearl and Arthur, dog-phobic Ramon, resident macaw Mojo, and Ryan, a motherless two-year old whom Katie befriends, breaking her "no kids" rule. Katie rubs elbows with the rich and famous--Alan King, Leona Helmsley, Peter Jennings, Katharine Hepburn--as she accompanies the author, a former journalist with CNN, on his interviews. She commandeers the television remote control, steals spaghetti, receives a Christmas gift from Ivana Trump, stars as Toto in a play production of The Wizard of Oz, and is the subject of a Page Six item in the New York Post. Aside from her antics and brushes with fame, Katie proves to be a source of comfort after September 11 and when a member of their makeshift family dies. Plaskin’s engaging narration and Katie’s ability to make community will endear this book to readers. (Sept.)
Posted by Glenn Plaskin's Reflections at 11:48 AM