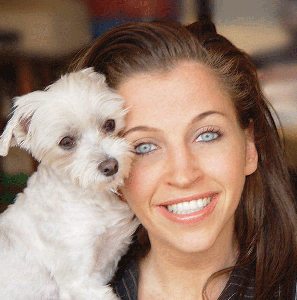 At lunch yesterday at Manhattan's Bricco on West 56th Street, I was lucky enough to meet the ebullient WENDY DIAMOND, the founder and editorial director of Animal Fair, the lifestyle magazine passionately devoted to saving animal lives by focusing on animal rescue. Wendy is also the author of many fantastic books, currently the indispensable It's a Dog's World: The Savvy Guide to Four-Legged Living, which will head up the bestseller list during Wendy's upcoming 15-city book tour.

The latest issue of Animal Fair has Charlize Theron on its cover, pictured on the beach with her soulful rescue dog, Tucker. Previous cover interviews at Animal Fair include everyone from Beyonce and Halle Berry to Serena Williams and Kim Cattrall, all of whom support Wendy's lifelong mission to save the lives of animals. 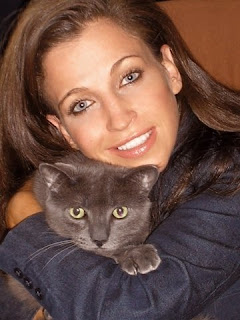 Wendy's determination is fueled by shocking statistics: 6-8 million cats and dogs enter shelters each year, while only 3-4 million of them are adopted, many of the rest euthanized. This is tragic beyond words and each of us must step up and help these incredible animals in whatever way we can.

Over lunch, the first thing you notice about Wendy is her down to earth warmth, boundless energy, and those hugely expressive blue eyes. A native of Cleveland (she laughs about this almost apologetically), her rise to becoming one of the most influential media personalities in New York was a quick one. Her philanthropic calling began with her work for the Coalition for the Homeless, during which time she realized how profoundly important homeless animals were as confidants to homeless people. She sprang into action, writing two cookbooks which raised over two hundred thousand dollars for homeless charities. It wasn't long before she adopted her Russian Blue cat Pasha from The Animal Care and Control facility in New York, and later her Maltese Lucky. Soon after that, she conceived Animal Fair.

Wendy is a great example of turning a passion into a mission, and her driving force is pure contribution--helping people and animals to live a happier life.  Isn't that what it's all about?

And if you want to help or contribute, just find the nearest animal shelter. There's nothing more poignantly disturbing than visiting one of these overcrowded shelters and seeing dogs and cats in "jail," staring at you through kennels, pleading with their eyes to be adopted. 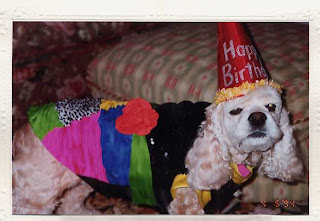 I can tell you that the star of my upcoming book, KATIE, was unwanted and left behind by her more attractive litter mates. With long skinny legs and huge ears, her body proportions were all off--and she'd been nicknamed "Twiggy" due to her scroungy appearance. I was told that she would never be a show dog. But who cares?! Take a look at her now! (She always dressed up for birthdays. is that a face you could love?)

That first day when "Twiggy," aka "Katie," curled into my arms and looked up at me with those big brown eyes, that was pretty much it. After she licked me on the face, it was love at first sight. If only human love worked so easily and quickly, right?!  Katie was so warm, trusting, and sweet. I had found my dog, the one I'd been waiting for, and I felt it with total conviction.

There's a dog or cat out there, right now, just waiting for you.


Posted by Glenn Plaskin's Reflections at 11:15 AM