The Verdict On Judge Judy: Funny & Fierce, She Reigns Supreme 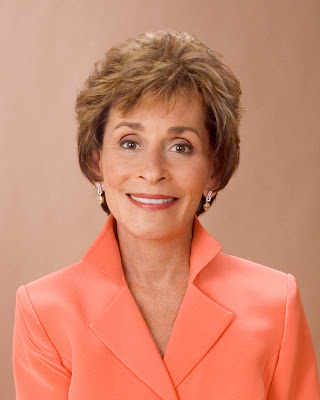 Even in the company of the great Katharine Hepburn, Elizabeth Taylor, Nancy Reagan, and Carol Burnett, one of my favorite interview subjects of all time is the incomparable JUDGE JUDY,the charismatic powerhouse who reigns over the highest-rated court session on TV, with more than ten million viewers tuning in daily.

Amazingly, she's been #1 for the last 700 weeks! Beyond ratings, nobody can surpass Judy’s astute judgments, spicy humor, supersonic mind, and no-nonsense attitude.

And best of all, fear is not in her vocabulary—as she says the things we all want to.

“LOOK at me, Madam!” shouts the Queen of small-screen Justice to an evasive witness.

“Does it say ‘stupid,’ here?” she inquires, pointing briskly to her forehead.

“They don’t pay me because I’m beautiful,” she mugs sweetly to the cameras. “I’m real SMART, so watch it!”

You said it. When I first met Judy years ago for breakfast at her favorite bagel shop in Manhattan’s Upper East Side, she directed me to get her a sesame bagel with cream cheese before our interview began. You can be sure I did it.

Regularly beating Oprah in the afternoon ratings, I asked her about the secret to her phenomenal popularity. “I cut through the bull, I go behind the veil, and get to what’s REAL,” exclaims the mother of five and grandmother of eleven. 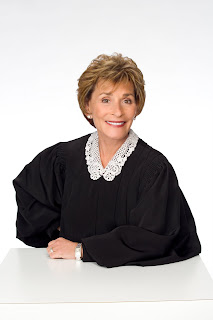 Recently when a witness interrupted her, she boomed: "Do you see my mouth moving? You're irritating me," she snapped. "I'm the boss, applesauce."

To a woman bringing a lawsuit over a crushed hat, she advises: "You'd better get a life, Madam."

The petite star, who wears a size 2, $400 silk robe on the Bench, is charming and warm in person, suntanned and relaxed after a recent vacation in Florida with her husband Jerry. Much of the summer this year will be spent at Judy's stupendous new 24,000-square foot home in Connecticut, the multi-million dollar family compound she rightfully earned as the nation’s top TV judge.

I was thinking today that a decade before Judy hit the national stage, we had our own judge and jury in Battery Park City and her name was PEARL, the octogenarian heroine of my new book, Katie Up and Down the Hall. Like the best of matriarchs, Pearl, like Judy, also had strong opinions and high ethics on any and all issues, and wasn't shy about expressing them.

“Why do all these girls walk around naked in the middle of the fall?” was one of her frequent questions, referring to the army of joggers outside on the Esplanade. “In my day, even hookers had more clothes on. What happened to good manners?”

"Oprah gets it right every time," she pronounced, "but Geraldo should retire!"

“The President,” she observed one day, “is suddenly a hero—but I still think he’s a zero,” and that was just before breakfrast.

Like Judy, Pearl could be feisty one moment, and girlish the next.

She gave the thumbs up or down on my friends and dates; she refused to be taken advantage of, had a wry sense of irony, and could see the ridiculous in things. She could also be tough and abrupt. In fact, I loved in Pearl what I love in Judy. She wasn’t a phony. What you saw was what you got.

Although modern in her thinking, she wasn’t necessarily interested in adopting technology foreign to her, so she had no cell phone and drew the line on computers as well.

“What do I need it for? I keep all my recipes in this index box, and when I want to talk to somebody I use the phone or write a letter.” Case closed.

She was, however, much more interested in a before-dinner drink: “I love beer,” she told us, swigging one back, “which is why I bought lots of Anheuser-Busch stock. It’s always a good bet and I’m never going to lose on it.”

The true make of confidence, Pearl could even make fun of herself.

One night I pulled out a Donald Duck hat I’d purchased for her at Disney and she happily put on the hat, looking absolutely ridiculous in it as she nonchalantly chatted away with a group of friends before breaking into giggles. My dog Katie looked up quizzically, wondering about that odd thing on Granny’s head.

“I’ve seen worse hats, though I’ve looked better in them,” Pearl said, mugging for the camera as I snapped away.

Even into her 90’s, she never lost her game spirit or her wit. On her worst day she was more fun than many people were on their best.

One evening, she was visiting with a friend of mine who had a constant battle with the bulge: “You look thinner,” she told him.

When I came into the room, he joyfully turned to me, and said: “Pearl says I look thin.”

Pearl shot him a look, and retorted: “I didn’t say that. I said you look thinner.”

Like Pearl, Judy is a great dog lover--and adores her adorable Shitzu, Lulu. I hope both of them will come to our launch party in September, which will be hosted by the incomparable Joan Rivers and"The Prince of Chintz," interior designer Mario Buatta.
Posted by Glenn Plaskin's Reflections at 11:12 AM