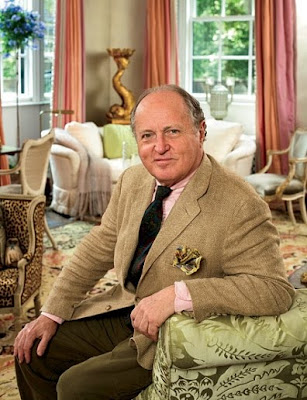 I recently spent two incredible evenings with the legendary interior designer MARIO BUATTA, a longtime friend and frequent interview subject who appears in my upcoming book, Katie Up and Down The Hall. Mario stars in an especially fun chapter titled "Prancing With The Stars," all about my dog's tete-a-tetes with a host of celebrities, one of her favorite being Mario, the nation's "Prince of Chintz,"  the acknowledged master of the English Country style, his work often featured on the cover of  Architectural Digest.

Mario is also a passionate lover of theater, comedy, cabaret, and any good performance in town. One recent night, he kindly ushered me backstage to greet Joan Rivers after one her hilarious performances at the West Bank Cafe, the proceeds of which go to her two favorite charities, Guide Dogs For The Blind and God's Love We Deliver.

And then a few weeks later, Mario invited me to a great cocktail reception at Michael's, a benefit for Literacy Partners, hosted by two of its champions, Liz Smith and Barbara Taylor Bradford. This was followed by a quick dinner at Orso, then a fantastic Monday night showcase at Birdland Jazz Club, where we saw the indomitable Marilyn Maye, still an energetic wonder in her 80's, her voice untouched by time. 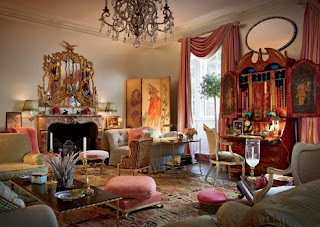 Through it all, Mario has the best sense of humor in town. Irreverent--despite such illustrious past clients as Barbara Walters, the Forbeses, Barbara Bush, Blair House (the President's guest house), and Mariah Carey, Buatta is a notorious prankster. He once showed up at a Peggy Lee concert with a monkey on his lap, strolled through Central Park in an all-blue chintz suit, and arrived at a masked ball wearing a lampshade on his head.

The first time I met Mario for a cover story interview for the Daily News, he was rather tame in a blue suit, but just as funny as expected. "My Mom  once told me, 'maybe you'd like to be a psychiatrist or an actor or a lawyer,' but I combined all three and became an interior decorator!"

Indeed. Months later, after we had become friends, Mario came over to my apartment one evening, bringing along as a present one of his signature dog pillows with a painted spaniel curled up on it. This was a gift for me, though my cocker spaniel Katie started ripping away the tissue paper as I took it from Mario's hand.

"This isn't for you!" Mario lectured Katie, who scrammed away, as she was never comfortable around tall people. (Mario is over six feet tall). But this didn't stop Katie from requisitioning that pillow. When I wasn't looking, she knocked if off the couch and I found her napping on the carpet with it under her head!

That night, I discovered my dog was doing a little re-decorating of her own. She had pushed the pillow into her kennel and arranged it carefully with her paws. She napped on it nearly every afternoon thereafter. As Mario later remarked to her: "Now you're English!"

You'll soon be able to read more of "Prancing With The Stars," a chapter which includes Katie's adventures with other stars such as Katharine Hepburn, Peter Jennings, Bette Midler, Ivana Trump, Leona Helmsley, and Farrah Fawcett. 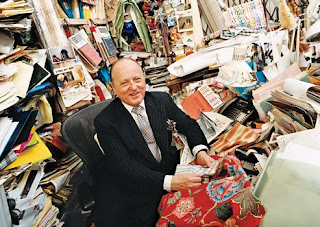 And speaking of stars, you'll see many more of them at the KATIE book launch party in September, an event to be co-hosted by the inimitable Mario and by Joan Rivers, the evening to benefit Guide Dogs For The Blind.

And on that evening, what might the irrepressible Mario and Joan do to liven up the festivities? We'll just have to wait and see.

Posted by Glenn Plaskin's Reflections at 11:01 AM